On the DNA of organisations – what is next? 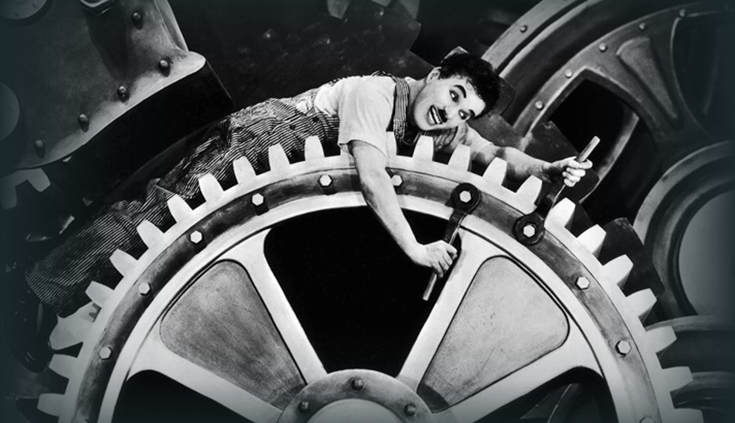 To paint a picture of what the basic principles behind future management models are, we first need to look backwards. The first-time human mankind needed to organize in a more comprehensive way, on a wide scale, was in connection with the industrial revolution. At the centre was the fantastic technology which overshadowed all previously imaginable and experienced results.

Therefore, it is quite understandable that the ideal image of how to lead and manage an organization was inspired by this mechanistic view of the world. Engineers not only developed and constructed industries they also were the founding fathers of how to manage these industries. The first dominating management model, so-called ‘Scientific Management’ (Taylor,1911), or ‘Taylorism’ is based on maximising efficiency given a mechanistic view on organisations. The work was divided into smaller parts. The majority of employees had very limited education and were trained to perform these limited sequences of work which then lead to the assembly of the final product.

At the time, a worker was considered just as exchangeable as any part in the product. Specialization was at the centre and the organization was divided into functions and departments. This image of an organization as a machine, that can be controlled and consists of many predictable cause-effect relationships, has become dominant since then.

Often today we still find organizational charts with these functions and departments. In fact, it is actually still our most common management model and it is in many ways unbearably outdated. Instead, we argue that an opening may rather be to view and organisation of today and tomorrow, more like an ecosystem.

Any organization, public or private, exists based on the fact that it creates value for its environment – that is, for customers, employees, and society.

Since the early twentieth century, all ideas about management and performance have more or less revolved around making the production process as efficient as possible. During the second half of the last century, when Western societies were rapidly developing into service-driven economies, organizations created value by meeting customer demand: they provided services and, in many cases, “tailor-made solutions”. Subsequently we saw the development of service concepts – all ideas about internal organization were based on customer demand and customer experiences.

By the end of the twentieth century a knowledge and innovation-driven economy began to gain impetus. In this type of economy, value is created as a result of a creative process, of improvement and innovation. Together with others – particularly customers – value is defined and developed in a network.

These three types of value creation each require their own type of organization, functioning according a fundamentally different organizational logics, each of which comes with its own worldview and mindset. Over time the internal organization becomes more complex, from orderly and standardized processes to demand-driven and customer-specific processes, to a stage where the organization and its environment virtually merge together. Initially, customers were considered buyers, while organizations were regarded as being discrete, disconnected from the outside world. We then saw a shift to customer centricity: the whole process of thinking about “what to deliver” and “how to deliver” begins with the customer. This involved a shift for organizations: they had to learn to think “from the outside in” instead of the other way around. In other words, the exterior world became more integrated with the interior world.

In the third logic – the knowledge- and innovation-driven economy – the line between organizations and their environment becomes increasingly permeable and blurred.

In the third logic – the knowledge- and innovation-driven economy – the line between organizations and their environment becomes increasingly permeable and blurred. Value is created in networks, in chains, in temporary, informal partnerships or in free spaces, virtual or otherwise. Organizational limits are becoming more open, and organizations are part of a greater whole in which they are influenced, managed and defined. At the same time, organizations also influence the greater whole. In this third logic we can barely distinguish who exercises influence on what. It is not clear whether cause and effect are related: we are dealing with what is known as circular causality and interconnectedness. Value creation is the result of co-creation in various, often temporary, networks.

We argue that todays and future management models need to be built on a totally different view of what an organisation actually is. The organization as a whole, must learn to function within a context of emerging diversity, interconnectedness and complexity: functioning as an ecosystem.

Viewing the organization as an ecosystem

We perceive diversity, interconnectedness, and complexity all around us. At the same time, we experience that control over complex systems remains out of reach. Therefore, we suggest that organizations should be viewed from an ecological perspective: that is to say, starting from ecology as a fundamentally connective discipline (Van Dijk, 2016). This field has examined the functioning of open, dynamic, and complex configurations – ecosystems – since centuries and uses complexity as a point of departure. But how do we define an “ecological perspective” in an organizational view? We limit ourselves for now to what we consider the four main characteristics.

First of all, an ecological perspective approaches organizations as living configurations, consisting of a large number of interacting agents – individuals, teams and departments operating within specific physical conditions such as buildings, along with resources, tools and procedures that influence and shape each other in horizontal, vertical and diagonal relationships. Relations and relationships between the agents, between “humans” (Weick & Sutcliffe, 2007; Gergen, 2009) and also between “humans” and “non-humans” are considered essential (Latour, 2005). These interactions are non-linear, and minor changes can disproportionately engender substantial effects.

Third; from an ecological perspective, organizations are always subject to an underlying dynamic through time, it is inevitable that they change. We see many actual organizations change on a daily basis, despite – and sometimes thanks to – their management. An ecological perspective regards the development of organizations in terms of dynamics in time and the organizational lifecycle (e.g. Cameron & Quinn, 1983; Baum & Shipilov, 2006; Van Dijk & Peters, 2011). Each organization has its own history. The past has been integrated into the present and has its own underlying dynamic, in which autopoietic and adaptive capacity play a key role* (Box 1).

Fourth; from an ecological perspective, organizations themselves also form part of larger entities, including communities of practice, professional groups, and local, regional, national, international and global markets. They are influenced by these entities while at the same time having an impact on the greater whole. We determine ourselves how we define organizations and their borders, if any. Organizations and organizational limits are human constructs; they are ambiguous. It is essentially a choice we are making. We determine the organizational limit based on the perspective, the objective, the significance or the meaning we assign to an organization.

In studying organizations, an ecological perspective compels us to put the day-to-day operations of organizations first. We are used to considering organizational performance based on a variety of academic disciplines and logics, including business or organizational logics (instrumental rationality), sociology (the nature and dynamics of social relationships) and psychology (underlying psychodynamic processes). In real life however, there is no neat division between these disciplines: in actual organizations, they are intricately and inextricably linked. An ecological perspective involves a more holistic approach and synthesis rather than reductionism and analysis – without ever losing sight of the analytical component.

By adopting an ecological perspective on organizational development, a picture of what the basic principles behind future management models arises. It helps us in exploring how to develop our management-model and way of organizing, making our organization agile enough to cope with the pace of development of our surroundings.

In order to take a first step towards using an ecological perspective, we have formulated a few questions below that you and your colleagues may ask yourselves in relation to your organization.

If we are to innovate in the sense of “create”;

In our quest to create more “trust” in the organization;

And, questions more focusing on your agility as an organization and your contribution and strategy towards sustainable success;

Complexity is regarded as a given, as a starting point.

An ecological perspective implies an approach of dynamic, complex, adaptive configurations, having emergent qualities, being subject to underlying dynamics through time and forming part of and being affected by a greater whole. Complexity is regarded as a given, as a starting point. This requires a transdisciplinary approach that extends beyond the sum of different disciplines, a strong interaction between theory and practice and includes dynamics in present, past and future: an approach to discover simplicity in complexity.

Please share with us your thoughts reading this. Does an ecological perspective upon organisations make sense to you and why? Are there other aspects you would like to put forward? Do you have other proposed questions to be asked?

Gerda van Dijk is Professor in Public Leadership, Director of The Zijlstra Center for Public Control, Governance and Leadership, Vrije Universiteit, Amsterdam, The Netherlands and a self employed consultant. In the period 2013-2017 she was appointed as Professor in Organizational Ecology at the Tilburg University, The Netherlands. She can be reached at; gerda.vandijk@xs4all.nl or Gerda.van.Dijk@VU.nl

Mats Deleryd is President of the Swedish Institute for Quality – SIQ, and Professor in Quality Technology and Management at Mälardalen University, Sweden. He can be reached at; mats.deleryd@siq.se

As in ecosystems, organizations have a number of characteristics that are designed to maintain the organization and ensure its survival: we refer to this as their “autopoietic capacity” (Beer, 1979; Maturana & Varela, 1988). Examples of this include “resistance to change” and the “self-cleansing ability”.Autopoietic capacity is also aimed at maintaining one’s own nature or individual identity. A strong vision and mission and organizational values may be expressions of autopoietic capacity. At the same time, organizations must also be able to respond to signs from the environment and be able to adapt accordingly, this entails adaptive capacity. Examples include organizations that respond quickly to new market opportunities, continue to develop and are able to cooperate. Autopoietic and adaptive capacity are both vital to organizations, although they also work against each other. If they are in balance, they generate a creative tension and dynamic and enable organizations to evolve. However, if one or the other is too dominant, this will either result in isolation and eventually death, or it will be fully integrated into its environment and disappear as a result.

The column is based on the inaugural speech of Van Dijk (2016) and builds on the references listed below.

Organizational life cycles – why organizations do as they do!