Organizational life cycles – why organizations do as they do! 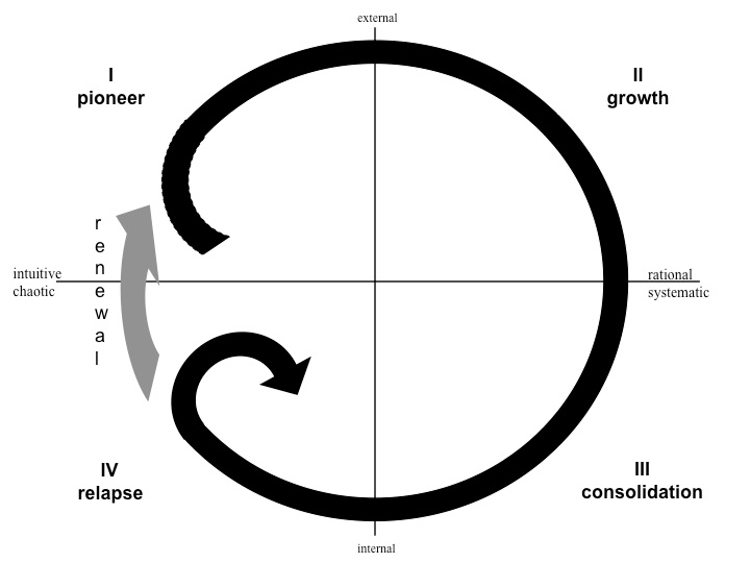 In our column ‘On the DNA of organizations – what is next?’ September 2020, we argued that today’s and future management models need to be built on a totally different view of what an organization actually is. We perceive diversity, interconnectedness, and complexity all around us.

The Life Cycle Theory (e.g. Greiner, 1972; Adizes, 1989) although widely accepted, is not one clearly defined theory. Organizational researchers proposed numerous life cycle models varying in number of stages – from 3 up to 10 – and based on different organizational phenomena and characteristics (e.g., strategy, structure, individual mentalities, functional problems). This large variation in the descriptors and labeling of the stages could well be explained by the variety of reasons shaping the focus of the different authors as well as the contexts of organizations that makes sense of the various factors and features evident. Miller and Friesen (1984) pointed out that the most important conclusions of the literature on organizational life cycle – particularly cases based on empirical data – are ultimately: that each of the relatively stable periods in the life cycle appears different from the others; that these different periods all have a strong internal coherence; and that each stage identified possesses a relatively small number of key attributes as well as a host of other attributes, which are logically predictable and consistent with the specific unifying theme of each life cycle period.

The various stages differ significantly in their characteristics; in their organizational logics and culture. Concurrently, the effectiveness of certain leadership and management interventions will differ among the stages.

The organizational life cycle is seen as a natural process. Organizations develop from chaotic to dynamic, then systematic, and end with rigid. From there the organization either dies or finds a way to begin anew. Generally, four[1] successive stages can be recognized in an organization’s life cycle: the formation or pioneer stage (I), the growth stage (II), the mature stage (III) and the decline stage (IV) and with general consensus about the characteristics of the various stages (Quinn and Cameron, 1983; Lester et al, 2003; Van Dijk and Peters, 2011). These 4 stages can be described as follows and are shown in Figure 1.

Beginning organizations are characterized by a strong external orientation and a dynamic, chaotic organizational form. There is no clear or explicit strategic vision, the target group is still fluid and the organization has not developed fixed organizational patterns, but it does display plenty of entrepreneurship and drive, with a product that addresses a niche in the market. The employees are focused on ‘scoring’ and operate aggressively in order to win a position in the market. There are few internal rules or structures, but the largely young staff display enormous effort and commitment.

The company climate is passionate and blunt. The actual leadership is often concentrated in the hands of a single person – the leader – a pioneer who may have a charismatic personality. The communication structure is simple: the boss usually decides what needs to be done.

In stage II, the organization grows and determines its direction. It clarifies its market and ambitions and reacts to changes flexibly with a conscious strategy. Growth does not always entail striving for higher profits or sales; it can also be geared towards reinforcing the organization’s expertise, impact or market position.

The general organizational and process structure has been elaborated and established with a systematic type of planning and a focus on output and results. The organization’s leadership includes multiple persons, with board members responsible for specific lines. A limited staff supports management as specialists and implementers. Decision-making processes are structured, with a clear position for the person with final responsibility for the decision. Communications are interactive, but clear and direct. The company climate is smart and alert.

The organization is at risk of over-rationalizing and has a tendency to feel invincible, which may in turn affect its original sense of drive and entrepreneurship. It then moves on to a standardized, planned form characterized by a stage-III organization.

A stage-III organization works to continue obtaining the usual results and to manage its risks. Its attention is focused increasingly on the internal organization and improving and controlling the current situation. This implies a larger role for administrative aspects and an increasing influence of staff organizations. The company climate is primarily careful and responsible. Although this tendency of perfecting processes and procedures begins with the primary production processes, it soon spreads to other processes and procedures. This may even progress to the point where the procedure is more important than the result. It may also lead to a sense of arrogance: ‘The customer should be happy to be allowed to take advantage of our services…’

Interaction and decision-making gain a more procedural character and discussion is conducted through memorandums. Decisions are only taken after exhaustive research and formalised consultation.

The risks in this stage are posed by losing contact with the market and by the organization’s inflexibility. In this stabilized setting, the organization begins to react and innovate less rapidly. Stage-III organizations do not react easily to external changes.

In stage IV, the organization becomes even more introvert. The internal situation becomes the highest priority, with the result that the organization loses touch with its surroundings. Its past successes and institutions become sanctified. Failures and lower returns are played down or explained away due to temporary external circumstances. The enemy is ‘out there’, and the organization therefore requires protective measures. The company climate is defensive and makes excuses for itself.

The often overly structured formal organization begins to take a more ritualized form, and the informal organization becomes more dominant. The result is often a chaotic, unfocused work method. Roles and responsibilities of management and staff become confused and the employees begin to shift blame to one another. Decision making becomes an interminable process and new ideas are seldom implemented, and when they are, they have often a purely cosmetic character. In this stage, mutual mistrust and office politics are very common in order to protect one’s own position within the organization.

Eventually, as a combination of internal ineffectiveness and external challenges and preasure, the organization will cease being or be forced to embark on a dramatic renewal process.

The natural dynamics of the life cycle

If an organization does not consciously intervene in its underlying dynamics, it will progress through these four stages in a fixed sequence whereby the duration per stage is undefined, see Figure 1. The transitions which can be experienced as ‘tipping points’ occur within one of the following dimensions. The first dimension is the manner in which the organization is organized, within a spectrum running from ‘intuitive-chaotic’ and ‘rational-systematic’. The second dimension is the organization’s focus on a spectrum between ‘external’ and ‘internal’.

When a stage IV organization ‘dies’ – whether through bankruptcy or reorganization – a new organization is often created and the life cycle begins anew: renewal. Examples of this process include the start-ups that bloom after the mother organization disappears or is reorganized.

The various stages differ significantly in their characteristics; in their organizational logics and culture. Concurrently, the effectiveness of certain leadership and management interventions will differ among the stages. Therefore, it is important to be aware of which stage(s) dominate your organization and make then the right choices for your management and leadership interventions. It may help to keep in mind the following rules of thumb:

The life cycle helps to understand why an organization and its people behave as they do. It also helps to predict the next stage, when no additional management interventions are carried out. To us it is interesting to see that some organizations deliberately start new set-up of organizations to tackle new challenges as they believe the current organization, typically in stage III or IV, will just not cope with and deliver the changes needed. Hence, it may be better to start-off fresh with a green-field.

This reasoning raises a couple of interesting questions for all organizations; In what life cycle stage is your organization today? Given the changes in your organizational environment, what stage should you be in and if so, how to transition?

Gerda van Dijk is Professor in Public Leadership, Director of The Zijlstra Center for Public Control, Governance and Leadership, Vrije Universiteit, Amsterdam, The Netherlands and a self-employed consultant. She can be reached at; gerda.vandijk@xs4all.nl or Gerda.van.Dijk@vu.nl

Mats Deleryd is President of the Swedish Institute for Quality – SIQ, and Professor in Quality Technology and Management at Mälardalen University, Sweden. He can be reached at; mats.deleryd@siq.se

Adizes, I. (1989). Corporate life cycles: how organization grow and die and what to do about it. Engelwood-Cliffs, NJ  Prentice Hall.

On the DNA of organisations – what is next?